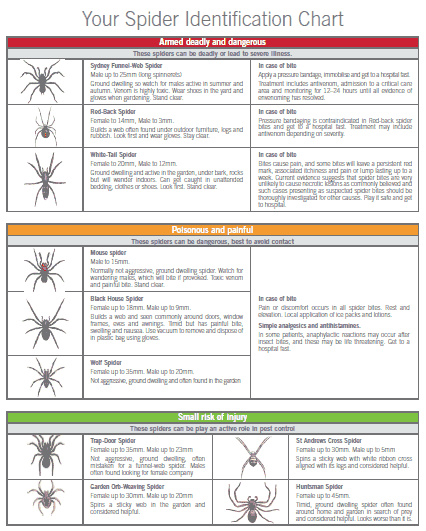 I find spiders in the home can often be a personal matter. Either you don't mind them or you do.

One of the main issues of spiders in the home is their ability to spin and deposit webs on, in and throughout the home and in some cases constant vacuuming and clearing of webs is needed, only for them to return the next day. Webs up high also allow for spider droppings that mark floors or furniture and which may require regular cleaning.

Another issue is the potential for bites from a spider. Most spiders have venom but are unable to pierce the human skin. Some spiders, however can pierce the skin and inject a venom, sometimes a very potent venom. For example the Sydney funnel web spider both male and female carry Atraxotoxin, the most dangerous of all toxins found in the animal kingdom.

Other spider species carry a venom that can cause local swelling, necrosis and other symptoms. Sometimes the symptoms are largely dependent on each individual's specific reaction to the spider toxin.

Speaking of reaction, some people just don't like spiders at all!
The sight of a full grown Huntsman spider suddenly appearing on a wall above their bed is enough for some people to want to call in an air strike. I always remember a friend who reached out for the towel after a shower and started to wipe her face. She then discovered a (usually harmless) huntsman spider on the towel and up it jumped to latch onto her chin!
Hunstman spiders do have a painful bite but apparently but she did live to tell the tale!

Treatment for spiders should be targeted to the particular problem you are having and it must be remembered that in this area 100% spider erradication should not be expected.

Please call us so we can discuss your spider control needs.