Video of a recent termite inspection in which a huge termite nest was found inside the house!
For more information see Termite Inspections

The word that grabs the attention of a home owner more than any other word is "termites". Through personal experience, friends, family and on the television, this word creates a certain fear and worry. There are many myths and half truths out there and I hope what I have written below will go some way to address the topic of termites. The other pages on our site regarding termites are dedicated to termite treatments and termite inspections.

It is estimated that 80% of mainland Australian houses are within 25 metres of a termite nest. Of course the size of the colony and the environmental conditions can dictate whether the nest is a threat but now it is easy to understand the CSIRO's claim that one in three homes will have some sort of termite attack. CSIRO also claim that the economic cost to home owners is greater than that of fire, flood and cyclones combined! At least you can purchase household insurance that allows cover for the these three disasters but there is no insurance for termite damage.

What are termites? Well, they are not ants. They have no relationship with ants at all, in fact they are closely related to the cockroach. Although termites are often called white ants there is no such insect as a white ant. Termites are an insect that plays a very important role in the earth's life cycle breaking down the structure of dead/dying trees, discarded logs and branches etc. There are many species of termites and only a handful are classed as economic pests to Australia. On the east coast of Australia where we are based, the most common types of termites are Coptotermes, Schedorhinotermes, Microcerotermes, Heterotermes & Nasutitermes. 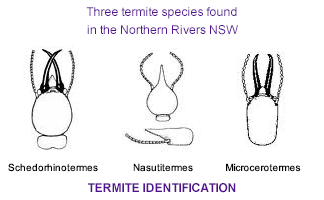 Heads of 3 species of invasive termite found in the Northern Rivers of N.SW.
(L to R) Shedorhinotermes, Nasuitermes and Microcerotermes

There are several species of termites and each have different characteristics. For example, Nasutitermes have an arboreal nest - a nest high up in a tree. Most times if you can see an arboreal nest, you will also notice termite trails (mud trails) that come down the trunk of the tree from the nest to the ground which allows them to forage for food sources. Microcerotermes may have a mound nest - sometimes up to 45cm high however these termites are not considered a threat to seasoned timber.

The subterranean termites will have their nest underground and are much harder or impossible to locate. They may nest in the root crown of a tree, a dead and buried tree but more than likely will be under the ground. Subterranean termites will make underground tunnels as they forage to travel long distances (up to 80 metres) from their nest to find food. They will then lay down pheromones to alert and lead other termites in the colony to this food source. We would only see evidence of them if they break ground and start climbing up a house pier or over a concrete slab or when their presence is discovered through finding damage. Another reason for travelling through these leads is that they have an exoskeleton and will perish in sunlight.

Termites are amazing to watch. They are forever building and repairing their tunnels as whilst they stay inside the tunnels, they will not fall prey to black ants, chickens and most other predators. Many people will tell you that if you have black ants, you won't have termites however this is a myth. Black ants and termites can co-exist very comfortably as long as the termite leads are not damaged. Sometimes you might find termites in a log in your back yard and if you flip the log over you will see the termites running for cover. If there are black ants around, the ants will be all over the termites and will feast on what they can, but the termite nest won't be in that log and where the tunnels disappear underground will be blocked off by termite mudding pretty much immediately. 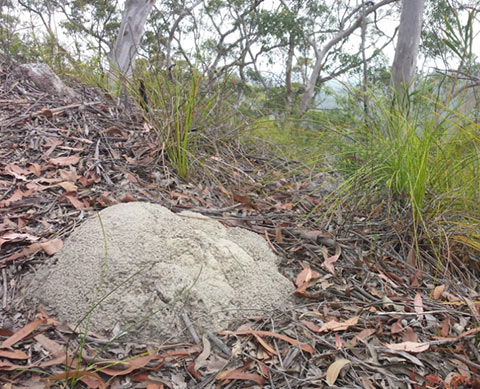 (Above) Termite Mound Nest.
This is not a threatening specie of termite but the nest can be indicative of other, more destructive termite species nearby.

Each colony will be made up of a queen, soldiers and workers. These different groups are called castes. It is incredible that these tiny creatures can consume whole slabs of timber and assist in the regeneration of forest areas when none of them even have eyes. The queen is there to keep pushing out baby termites at the rate of hundreds to thousands per day. The soldier termite's job is to defend the colony from attack and they shake their heads violently to make a noise (a ticking sound) to communicate down the tunnels of a threat. The worker termites are the only termites in the colony that have the capacity to feed on timber directly. It is the workers that feed the soldiers as well as those termites left behind in the nest.

It is through the soldier caste that we are able to identify the species of termite as these castes are very different in appearance and behaviour. This is why if you find termites, it is very important not to disturb them as we don't want them to disappear until the species has been identified. Correct identification is important so the right treatment can be selected. 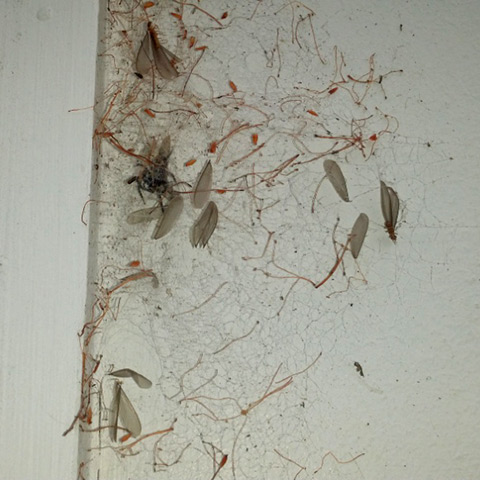 Termite Alates and their wings caught on a spider web during annual termite mating flight. To identify them we note that the Termite Alate wings are the same size unlike ant wings.

The Alate flight on the Northern New South Wales coast usually takes place during September/October during time of high humidity.

This is the time that the conditions outside the nest are comparable to that of the inside,hence the flying termites will have the best chance of survival.

You can identify the time shortly after this flight by noticing a significant number of small dead 'ant lookalike' bodies with wings that have fallen off all over your decking, or at the base of window sills or even across your car if it is parked outside. If a male and female pair up and happen to find a cozy place to set up home, they will become the original king and queen of a new termite colony.

As there are so many millions of Alates in an area and this process happens every year, it is easy to see why in 3-5 years these colonies can be huge and certainly pose a significant risk to nearby structures. 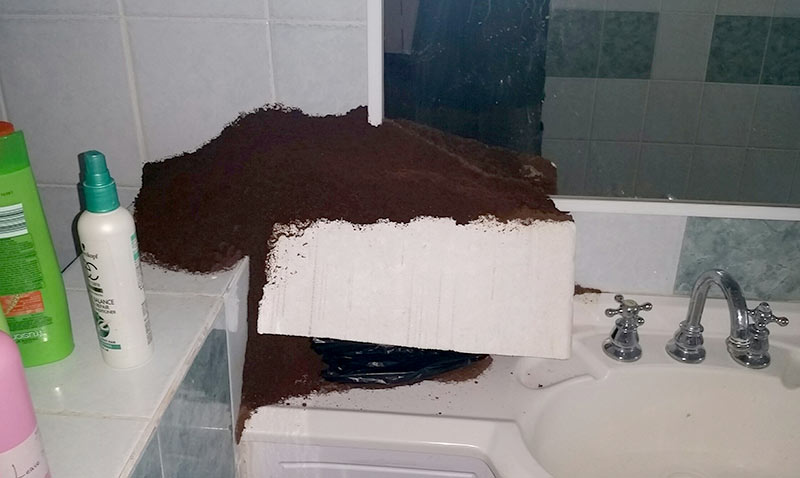 Termites emerging from below a vanity unit. The tenant put a styrofoam box over the nest just 3 days before I took this photo. At that time the box had completely covered it.